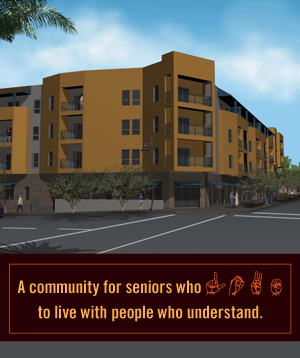 Apache ASL Trails* is an independent living center in Arizona, one of the few places for sign language users to retire with others who speak the same language. Apache was built in part with stimulus money and opened in 2011 with 75 apartments and a suite of amenities. Early last year (2013), the federal department of Housing and Urban Development (HUD) decided to investigate Apache (a story also covered by Limping Chicken) claiming that the complex violated what seems to be fair housing law by specializing in a single “disability”. Here’s what I think this means: if you take federal money for disability-related residential construction you can’t make those homes specifically for individuals who are deaf, autistic, of any other federal category of disability. Just  last week, HUD exercised discretion and dropped their investigation and it looks like Apache will be free – for now – to run the living center as intended. In my view, this is definitely the right choice for HUD and for Apache, although no one should consider the legal problems resolved. An aggressive (or bored) HUD director could cause more trouble for Apache in the future.

While the storm seems to have blown over, I though this an opportune time to reflect on the relationship between Deaf space and the state. Deaf space was probably first solidified as a term at Gallaudet University when architects, professors, and students began to ask the question, “What would a distinctively Deaf space look like?” One of the central conclusions of this question was the recognition that architectural spaces are designed with the assumption that the users of those spaces are hearing, speaking individuals for whom sound is a fundamental element of social experience.

Now, Deaf folks are not, as many presume, unaware of the physics of sound, nor are individuals in the Deaf community ignorant of sound as a social phenomenon. Sound and speech are much more complicated than their physics suggest. The result of this study was the development of architectural principles that have been used to construct buildings that are more photo-centric (I just made up that term, I think). A similar discussion happened in Columbus, Ohio where I live during the design and construction of the new parts of the Ohio School for the Deaf. This is all kind-of mainstream in the Deaf community at this point.

But this is not entirely new. Social space has been central to the identity of the Deaf community as long back as we have record. In fact, Mike Gulliver wrote his MA thesis and PhD dissertation on this topic. Such spaces include, famously, Deaf clubs, Deaf residential schools, Deaf sports teams, (a) Deaf university (Gallaudet, of course), and so on.

The challenge that Apache ASL Trails faced from HUD illustrates an important, often overlooked element of Deaf space: the state. There is a strange tension between the state and the Deaf community. On the one hand, states such as various levels of the U.S. government have cruelly targeted members of the Deaf community for sterilization, forbade immigration of individuals with hearing loss or who used sign language, and wrongfully imprisoned individuals within what used to be called “insane asylums” for their signing. Yet federal and state administrations have also funded Deaf residential schools, provided funding for places like Apache ASL Trails, provides the disability classification that enables many Deaf individuals to receive social assistance, and passed laws requiring interpreters in public  school and college. None if this is as neat as I’m presenting it, but you get the point: the Deaf community and the state have a love-hate relationship to say the least.

Yet this complicated relationship with state goes almost entirely unmentioned in Deaf studies literature. I think it’s important to remember that communities don’t just “exist”, but that they are formed, in part, through their relationship with the state. This is certainly true for the Deaf community, as is evident in the recent Apache ASL Trails situation. And that’s all I want to point out.

*”Apache” seems to be a strange term to use for the facility. It feels like one oppressed group is appropriating a term of identity from another. Imagine a residential center for Native Americans called “Deaf Apache Dorm”. Just saying.